After West Virginia we set our GPS and headed to Kentucky. Here’s the thing about our GPS, it doesn’t give us routes specifically for RV travel. 90% of our trip was on interstate but about 10 mins before we got to our campsite we were told to turn down a country road. It was a beautiful drive if you could tune out the sound of trees scraping the side of the RV and the sound of our teeth grinding as we tried to negotiate down the narrow road. We made it to the campground safely though, parked and settled in next to a windy river for the week. 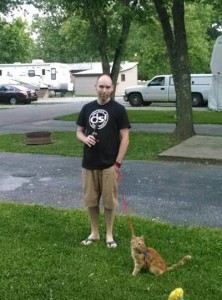 Elkhorn campground was nice and quite and situated directly between Louisville and Lexington. Since we have been traveling without a car, most of our visit we just hung out at home. Which was nice for Tonka since he could go out for walks and see the sights!

Towards the end of the week I wanted to check  out a local stand-up show and see a little bit of Louisville. We rented a $60 a day economy car. Economy my ass. But, the car was a brand new Fiat. I went from driving a giant RV to zippin around town in the smallest car you can buy. We actually revisited the road to our campsite and I have to say racing through the tree tunnels was a lot more fun in a Fiat. 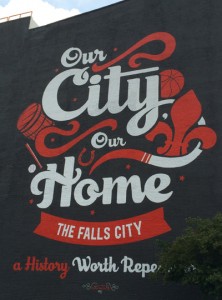 Once in Louisville we checked out  The Garage Bar based on a friend’s recommendation. We had a good sausage pizza (so much for being vegetarians this trip) and had some tasty beverages. After dinner we had a little time to chill so we hit up Haymarket Whiskey Bar (another spot recommended by friends) and had some more drinks.

We then rolled to The Louisville Comedy Underground to catch the comedy showcase. I thought the show was a booked show, but when I got there comedians were getting their names on a list. So I told them I was from out of town and they were nice enough to give me 5 mins. The audience was mostly comics, but it was good gettin my tired jokes a set of new ears. 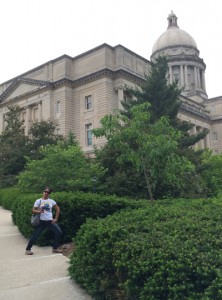 The next day we went to the state capital, which was amazing! We don’t typically geek out on stuff like this but the scale of this place was insane. We only popped in for 5 mins and did a quick run through before we had to be at The Buffalo Trace Distillery for a tour. But it was totally worth it! 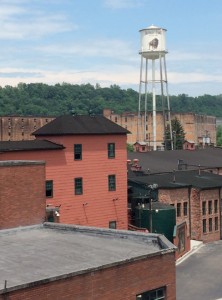 Driving up to the distillery the smell of Bourbon was in the air. We did the hard hat tour which took us to some really cool spots. We got to taste Bourbon in all its different forms from corn to cup. We had planned on hitting more distilleries but we were out of time and to be frank, with the overpowering smell and the strong samples of Bourbon at the end, I’d had enough for a while.

All in all Kentucky was relaxing and fun! You can check out all of our photos here. Next stop Nashville Tennessee! Yee Haw-nky Tonk!