Yellowstone! Not much to say, necessarily, but only because you can’t really describe it. We arrived on a Friday and didn’t do much. We stayed in West Yellowstone which was touristy but we welcomed the civilization! We’ve been missing being around people and stores and restaurants! So we embraced it. We immediately went to a coffee shop to get Wifi. (Don’t even get me started on Wifi right now…) That night, we went to a great restaurant in a bus. Yes! A bus! It was a taco bus! It was so cool. The front of it was the kitchen area and they had taken out the seats and installed long benches so you can sit & eat while looking out the windows. And the food was delicious!! 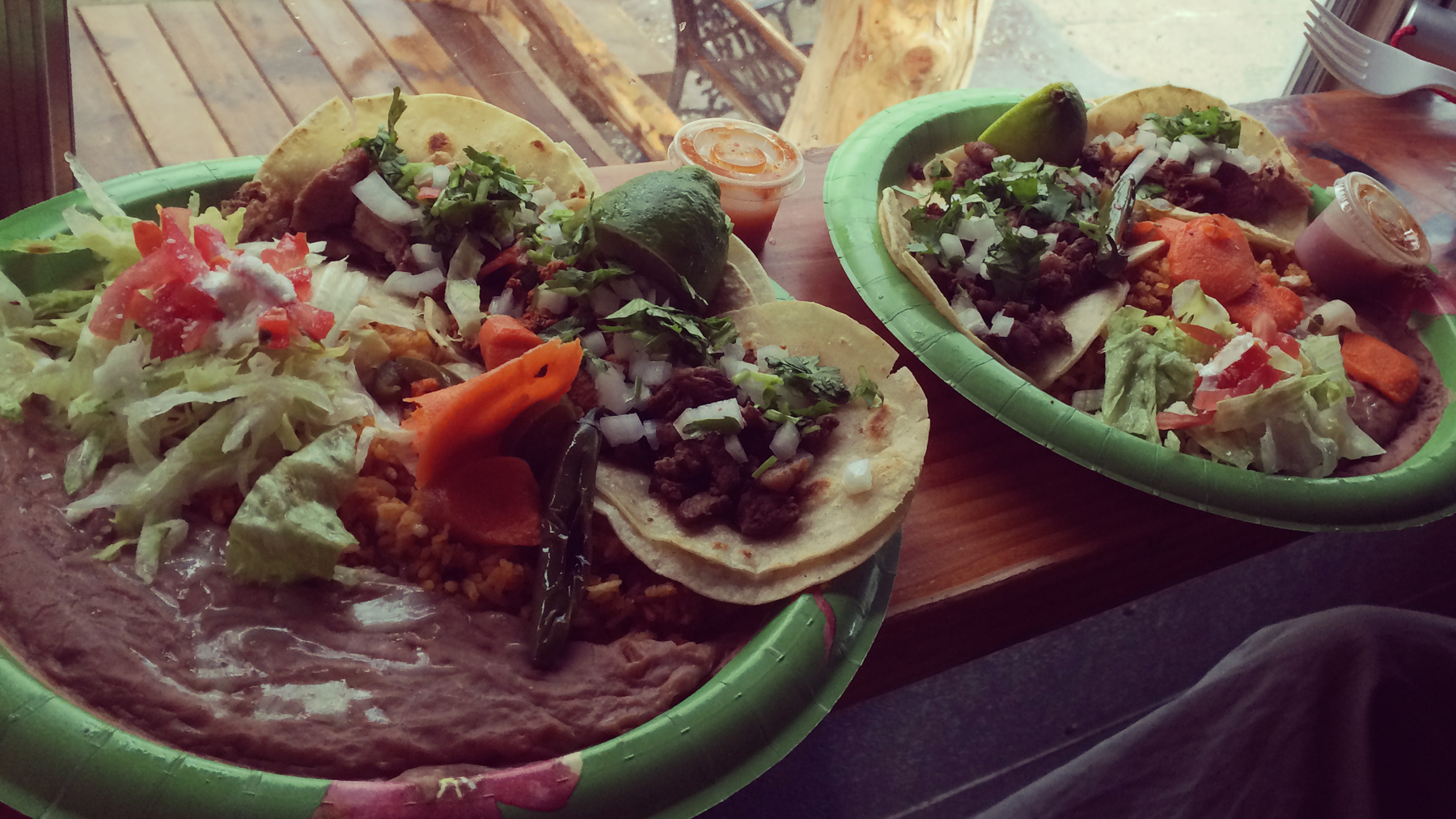 Saturday, we woke up stupid early. Like, stupid stupid early and headed to Yellowstone. Luckily we were our campsite was only 1 mile from the entrance. When we entered the park, it was so foggy but amazingly so. 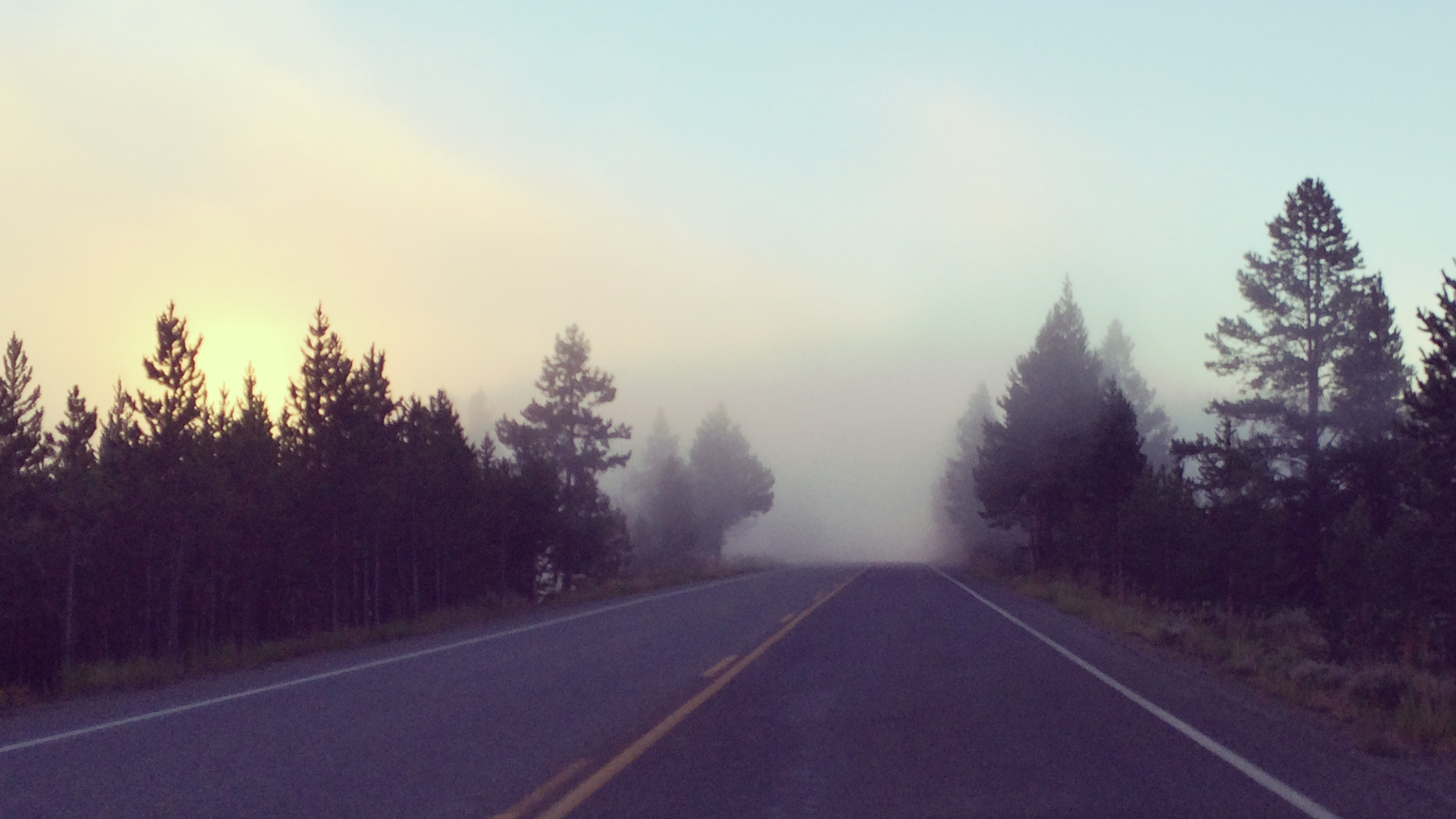 Unfortunately it kind of hindered viewing a lot of the sights because fog and geothermal steam look the same. But at the same time, very few people probably see it that way. Every spot we hit, there were maybe 2-3 other people, even at Old Faithful at 8:30am! Although we didn’t see much it was still amazing and breathtaking. We hit all the must sees in the lower loop: Firehole Canyon Drive, Firehole Lake Drive, Grand Prismatic, Old Faithful (of course) and Fishing Bridge. 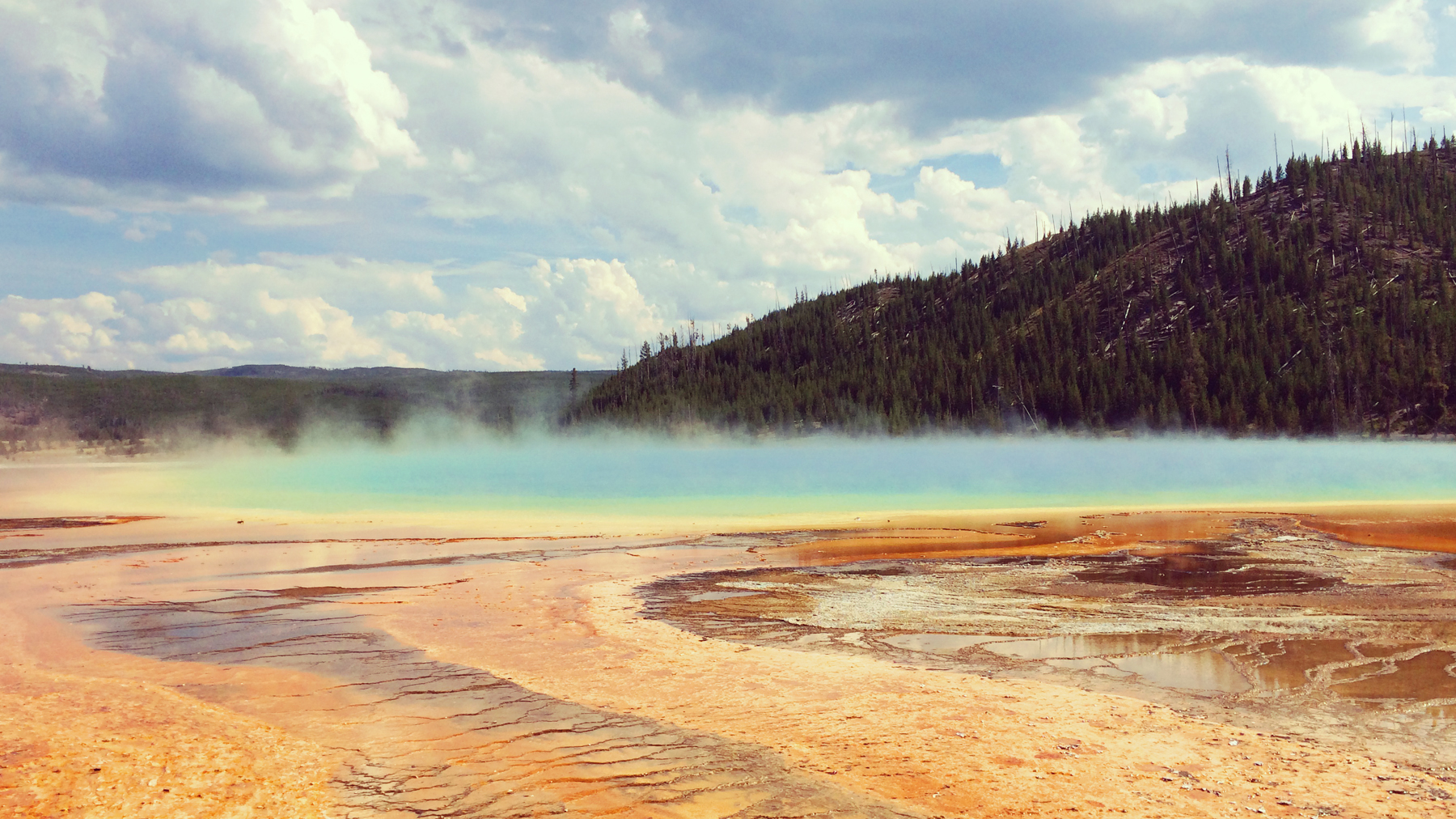 We actually ended up driving way back up to the upper loop to check out Mammoth Hot Springs, too. We walked around a LOT and we came back to the campground absolutely exhausted at around 10:00am since we got up stupid early. Just kidding! We got back around dinnertime.

Sunday, we got up early, but not stupid early. We drove on down to Grand Teton National Park. 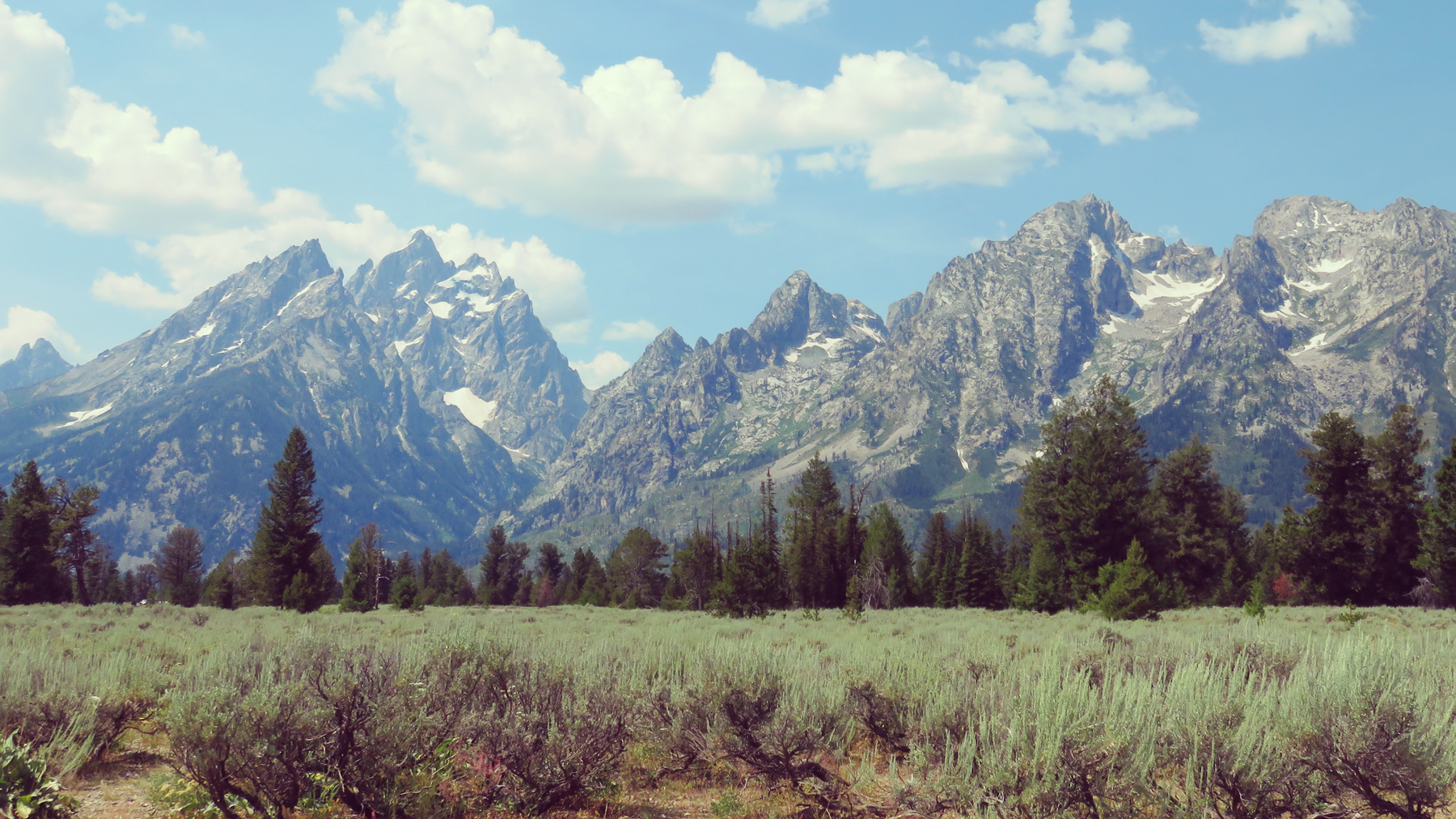 Honestly? We weren’t impressed like we thought we would be. I mean, look at that piece of crap view picture! (Totally kidding.) But, it was more of a drive through park and Shane even slept through some of it. It would have been great if we had our bikes with us but we left those with the RV. It was definitely more of an active park but we were looking for simple hiking, not biking or water related sports. We were still bone-tired from the day before anyway so it kind of worked out. On our way back through Yellowstone (the parks are basically connected and we had to drive through it to get home) we hit Old Faithful and Grand Prismatic again since they were too foggy the day before.

By the way, if anyone is thinking of heading west to go to national parks, get the annual pass! If we didn’t have one, we wouldn’t have kept going back through without going broke. It’s $80 for 1 year and many larger parks like Yellowstone are $25/car. We went in twice and after some other parks, it paid for itself. And we’ve gotten into the National Parks Passport. We have so many stamps in it and it’s fun to see it fill up! 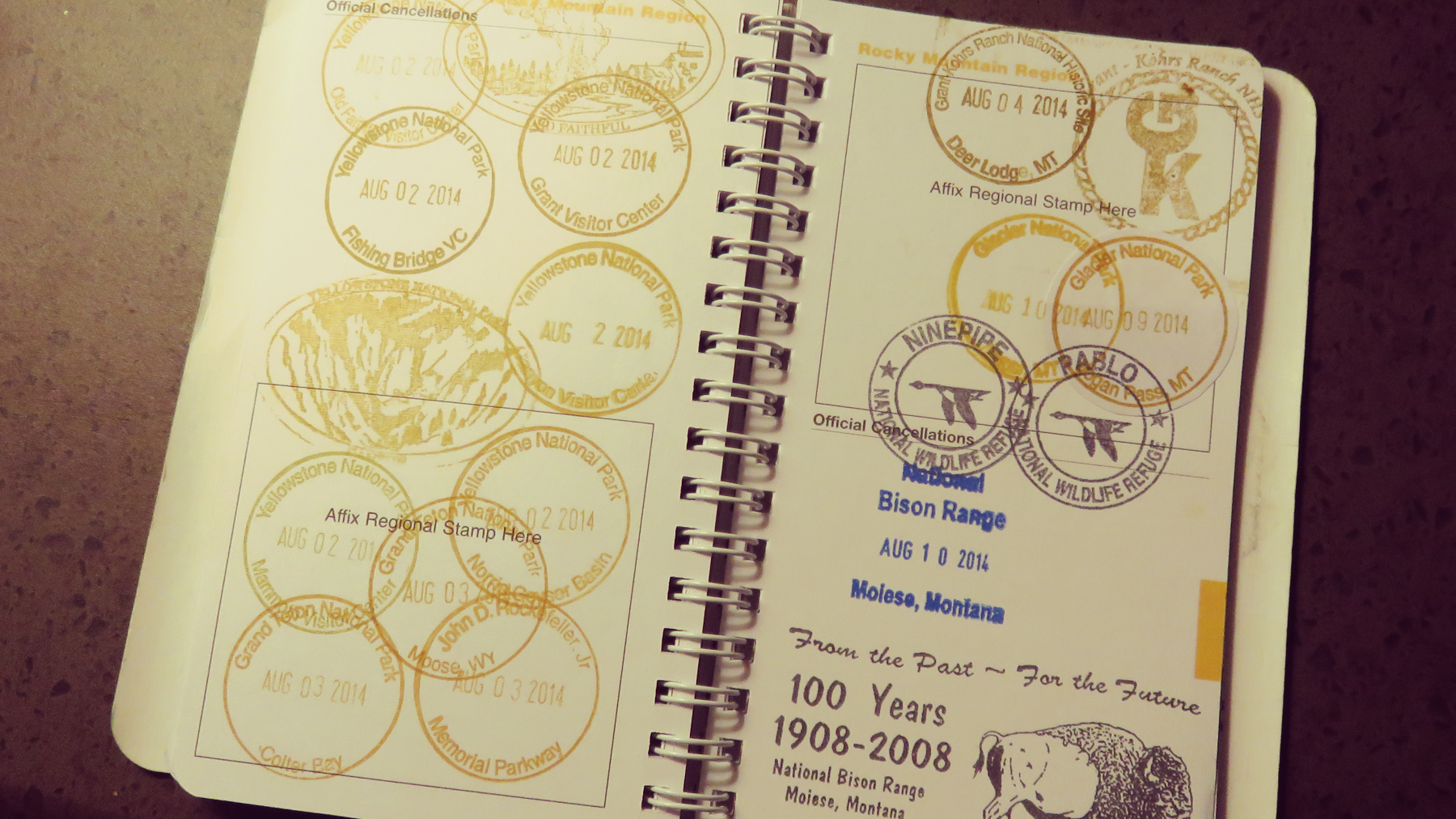 We came back and did some laundry and complained on end about the Wifi. Here’s the deal with campgrounds and Wifi. (I warned you not to get me started!) The people who run campgrounds don’t understand Wifi – one.bit. Most have hotspots and just don’t get that proximity and the number of people on it affect it. So we haven’t had awesome luck with internet at our sites, but we haven’t had horrible luck… yet… There have been some parks where we could watch Netflix and get on the computers at the same time but then there were others where we had to bike or walk somewhere else to get it. It’s frustrating but we’re managing.

The last night we were there, we heard wolves howling for a little bit in the evening. It was pretty cool! We never saw bears at the park but we did see bison. Not that it wasn’t impressive, but the bison in South Dakota are much more interesting because you just see so many more. We’re pretty snobby and particular with our bison viewing. There must be at least 2,187 in number before we stop to look. Otherwise, we plow through. 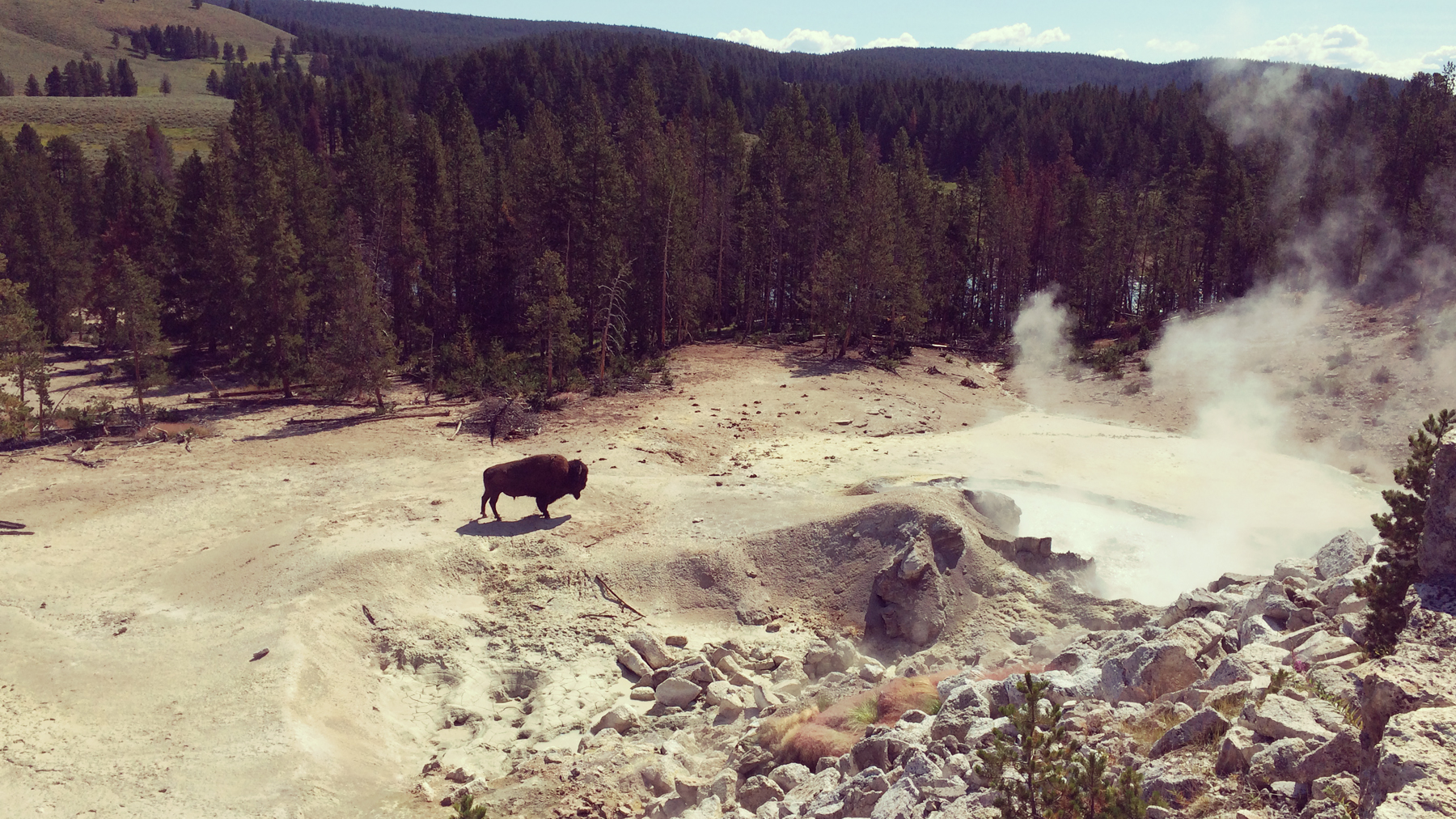 The next morning before hit some natural paths behind the RV park that had some geocaches so we were able to do that successfully.

Yellowstone was amazing! It’s mind blowing that the earth is like that. Just open pools of stinking, spewing, bubbling mud or water. Right in ‘Murica! Super volcano!

After leaving Yellowstone, we stayed 1 night in Missoula, MT on our way to Glacier National Park at a quaint little place called Jim & Mary’s. They had great internet! We had to get our oil changed and alignment fixed so that was just a bo-ring chore we did there. But stay tuned for Shane’s post about Glacier!

In conclusion, Yellowstone is a great park to visit and I recommend going. The end.